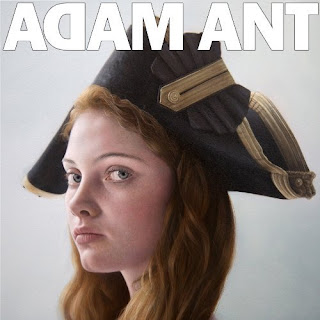 "ADAM ANT IS THE BLUEBLACK HUSSAR IN MARRYING THE GUNNER'S DAUGHTER" 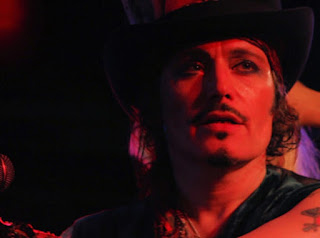 COOL ZOMBIE - As with the album this only single from the album was self-promoted and released.  The album teased at being the "Kings of the Wild Frontier" Adam back from the dead, the "marrying..etc" in the title is an old naval term for a punishment of flogging, seemingly how music stars are treated today! This first track is similar to the "Kings.." era, but I am still disappointed he went "back", as Adam was the only star in the 80s who looked forward and moved on, re-creating...oh well.  This was a decent tune with its half bluesy feel.

STAY IN THE GAME - This is an eerie, dark track in the style of Iggy Pop and like the majority of this album seem to go back to the early Punk days of the Ants of the "Dirk Wears White Sox" era and late 70s.

MARRYING THE GUNNER'S DAUGHTER - This is a merging of some dirty Blues with Rock 'N Roll.  It's a good track and a favourite from this album of hit and misses.

VINCE TAYLOR - A Punk Rock track reminding me a little of The Clash and The Ramones and the bands at that time of the mid to late 70s scene. Another decent track.

VALENTINES - Not really sure what this is or where it is going.  Just sounds like a mish mash of sounds and vocals put together (like some of the tracks here) in a big rush and sounds sloppy.

DARLIN' BOY - I have to say, even for a long time Ant fan, this is so poor, its just a myriad of wails and sounds sounding desperately to make a meaningful, atmospheric track, another disappointment.

DIRTY BEAST - Well the music sounds great on this one, but the vocals are very well back in the mix and almost inaudible.  Sounded a little like the "Strip" album tracks in composition but with the muffled vocals...I just don't know how Adam could put this out, to be honest.

PUNKYOUNGIRL - Another disappointing track that sounds like a rough demo, its just annoying to a fan that someone with such creativity and a perfection ethic that this album sounds unfinished.  Not a good track, but could have been with more care.

SAUSAGE - Great guitars but the vocals are horrible and the production even worse.  This is why this album barely gets played on my stereo with less than a handful of good tracks.  Sad.

CRADLE YOUR HATRED - The production lets this down again, and this time it's really annoying as it sounds like a really good track.  A good, moody Pop Rock track ruined by a lack of effort in making a class song.

HARDMENTOUGHBLOKES - I actually like this, it reminds me of the "Vive Le Rock" album, a bit of punch and Rock on the track.  Vocals could be more audible, but its almost like "B-Side Baby", the flipside to "Apollo 9".  Hard to pick great favourites here so I'm picking this one out!

SHRINK - This isn't a bad track, a Grunge/Punk/Glam Rock vibe about it.  It is loud, brash and seemed to have some thought behind the making of it.

VIVENNE'S TEARS - Not great production again, but the sentiment shines through that.  The song is about Vivienne Westwood, Malcolm McLaren's partner.  A nice off beat Punk ballad.

WHO'S A GOOFY BUNNY - Supposedly about Malcolm McLaren, it is a quirky number filled with the various chants and vocals Adam has used in his career.  It has a bit of everything but seems to work.  Early Ant recordings are reminded here.

HOW CAN I SAY I MISS YOU? - A big Electronic track, another fairly good track, similar to the "Vive Le Rock" days.  Another saving grace on this album.

BULLSHIT - This is probably my favourite on the album, a great New Wave Pop Rock/Grunge hybrid.  The mix is well done and the vocals match the backing nicely.  Pity it came at the end of the album!

HOW CAN I SAY I MISS YOU? (Reprise) - Basically just the instrumental version!