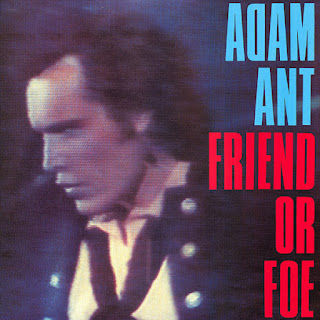 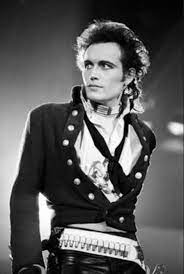 FRIEND OR FOE - Adam's first solo album kicks off with this title track carrying on with a more polished sound than "Prince Charming". More mature with the orchestration sounds and brass but still with the big percussion.  This track reached number 9 in the singles chart as the second single.  Its jaunty uptempo beat combined with the usual vocal improvisations of wah wah's and the like merged to make a catchy tune.

SOMETHING GIRLS - One of my favourite Ant tracks, its innuendo laden, mid tempo and full of whoops and whistles and yet a kind of ballad. It has a really dirty but sexy sounding backing.  Adam sings his best crooner style.  The catchy sing along chorus makes this a hit for me.

PLACE IN THE COUNTRY - Big, brash and Jazz/Pop fusion, always loved this track.  You can't help but sing along, its fast paced and you need to take a quick breath! Love it, really good song.

DESPERATE BUT NOT SERIOUS - Another ballad, Ant style.  A good Pop Rock track in my opinon.  A pulsating beat with Adam's breathy vocals merging superbly.  It has a moody and melancholic feel but packs a punch.  Criminally ignored on the UK chart only reaching number 33.  It is a classy track.

HERE COMES THE GRUMP - With its whimsical sound you would think this was an upbeat positive song.  It's actually a stark warning to would be Pop stars about the pressure of staying at the top.  A moody slice of realist Pop Rock.  Another catchy chorus too.

HELLO I LOVE YOU - Proving Adam could rock out with the best of them covering The Doors classic.  I wasn't much into The Doors but I love this track, a proper Rock workout, pumping beat and lots of brass and guitars. Great stuff.

GOODY TWO SHOES - Adam's debut single under his own name solely.  Hitting number 1 in 1982 it had an infectious beat and catchy chorus with Adam mocking the press who wrote about his supposed "wild lifestyle".  A real foot tapper and a simple classic.

CRACKPOT HISTORY AND THE RIGHT TO LIE - This was never one of my favourite Ant tracks, in fact probably the weakest on this album.  It doesn't seem to go anywhere, definitely a filler.  It is repetitive with some Country sounding vocals.  Not for me although some may disagree.

MADE OF MONEY - This is a great track, catchy chorus, a little repetitive but it works.  Fits in well with the album's big, loud brass orchestration mixed with Pop and Rock segments.  Another gem here on a vastly underrated album.

CAJUN TWISTERS - This is a strange one, and I still to this day am not sure of it.  It sounds a little like a demo from the "Prince Charming" album in its composition.  It is a bit of everything yet sparse in volume.  Unusual.

TRY THIS FOR SIGHS - Similar in style to "Made Of Money", great catchy chorus, pumping beat and uptempo backing.  Another one of my favourite sing along tracks.

MAN CALLED MARCO - Long time music partner Marco Pirroni takes control here with a really nice instrumental guitar track to finish the album.  Marco even has a few spoken words in this, a rarity in itself.