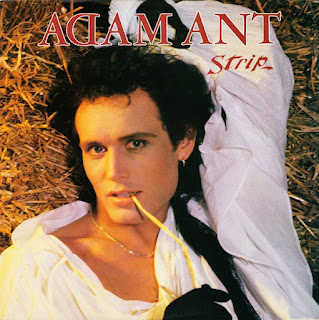 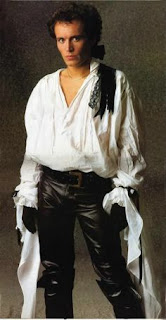 STRIP - The lead song from Adam's second solo album is a saucy, sexy romp with an almost classical Pop feel.  This is a much more mature sounding album with some great vocals and inventive merging of sounds.  Not always a favourite with Antpeople but I loved this album, it was refreshing and like other Ant albums, sounded like nothing else in the chart. This track is aided by Phil Collins on drums and Abba's Frida on the speaking part!

BABY, LET ME SCREAM AT YOU - An almost Motown Pop sound here, I really like this track.  Adam sounds much more confident singing and rather than the tribal yeps and growls he sings with a maturity and melody.  The lyrics are becoming more clever and thoughtful.  Still the sex innuendos are there but this is quality.

LIBERTINE - A moody, downbeat track but has a light backing and yet again something about sex is mentioned.  Adam states "my only books were women's looks, but the more I read the less I said".  I think people took the sex references too literally and ignored the quality of this album's recordings.  Some fans state this as Adam's weakest album.  This a melancholic yet weirdly catchy tune, when the music fades at about 3 minutes and Adam is left vocalising, it sounds great and worth a sing along with him!

SPANISH GAMES -  Strangely sounding a demo again from the "Prince Chraming" sessions.  It is sparse sounding and although has a pretty good chorus, it fails to grasp me.  Not one of my favourites.  Yes it IS Spanish sounding, though!

VANITY - A Pop Rock ballad in the usual Ant vein but with some really good, passionate vocals.  A grea chorus with doubed up deeper vocals.  Its sweet, melancholic and a great track.

PUSS 'N BOOTS - The lead single from this abum with another brilliant video.  The unmistakeable cat meow at the start still sends tingles down my spine.  I remember waking up early to catch this video on morning TV.  Love it, its quirky, crazy and cool all at the same time.  If anybody could make a video looking like a pantomime and make it cool (it's been done before!) it's Adam! Phil Collins again joins on drums with an awesome infectious chorus! Reaching number 5 on the UK chart, a classic 80s hit!

PLAYBOY - This reminds me of the "Friend Or Foe" album.  This track has Adam mocking his Playboy image, its funny, bonkers and brilliant.  Screeching guitar, pumping beat, various vocal styles, classical backing and a catchy chorus.  One of my favourite tracks and should have been a single here.

MONTREAL - Another strange song, it's got that old days' feel with its chugging backing, akin to an old car driving along.  The vocals are also kicked back in volume but this is great.  It sounds like a demo because it is so sparse but its a really nice, gentle composition.

NAVEL TO NECK - A favourite of mine, I just love the sound of it.  The sparse but tribal sounding beat with various vocal pitches and a dirty sounding punch is irresistible.  It's very New Wave Pop and hints to the "Kings" style cowboy styles and "Friend Or Foe" segments.  Love it.

AMAZON - Not a great ending to the album, a pretty weak track in my opinion, there are some great moments on here but this is not one of them.  Sounds very experimental, a little like "Spanish Games" , not that catchy or hitting your ears with a bang.