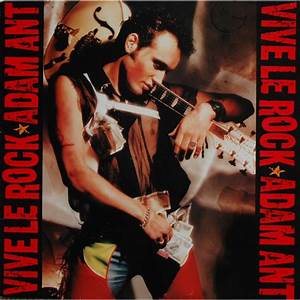 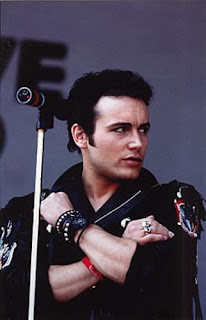 VIVE LE ROCK - The third solo album by Adam Ant had him with a steady band comprising of him, Marco Pirroni, Chris De Niro (aka Constinou) and Bogdan "Count" Wiczling.  The album flopped largely thanks to a criminally cut short performance at Live Aid thanks to Bono's antics and Adam volunteered his set be cut.  Still this is an all out Rock album and its great.  This opening track sadly only reached number 50 on the UK chart but its a great track with searing guitars and pumping beat.

MISS THING - Continuing the "live sound" of the opening track, this reminds me of The Doors a little and the album's crazy madcap lyrical notations carry on here.  It's a great upbeat, pounding Rock track that is a stomper from start to finish.

RAZOR KEEN - Progressive Rock meets Glam Rock and smacks into Heavy Rock.  This is an awesome track.  Even diehard Rock fans cannot stick their upper lip at this one.  Brilliant track.

RIP DOWN - This track reminds me of Billy Idol's sneering vocals in parts.  It's got a great Country Rock laid back vibe and has that "Kings" style tribal drumming in the background.  Another gem!

SCORPIO RISING - Taking me back to the "Prince Charming" album, this is what those tracks could have sounded like with better, unrushed production.  A gentle, inspiring Western style song with a simple chorus.

APOLLO 9 - The debut single from the "rockers in space" era, it reached number 13 before the album's release and before Live Aid.  It is said that the lack of promotion after this single from the record company led Adam to take a huge break in music for 5 years to try acting.  It's a great Pop track in the vein of "Puss 'N Boots", madcap, quirky with an infectious chorus.  Classic Adam.

HELL'S EIGHT ACRES - This reminds me of the 80s band, Tenpole Tudor (of "Wunderbar" and "Swords Of A Thousand Men" fame).  Its joint chanted vocals and big, brash sound make this a track I really like.  It's melodic, pacey and completely bonkers.  Brilliant!

MOHAIR LOCKER ROOM PIN-UP BOYS - It seems in te last 3 albums there is always one track that sounds like a "Prince Charming" demo! This is the one for this set.  Not great, it is sparse and not really engaging in any way for me, as a fan. Weakest track on the album.

NO ZAP - This is right out of Marc Bolan's copybook.  Glam Rock with a little Beach Boys, if you can imagine.  It's simple, classy and great.

P.O.E. - A Country and Western styled track that is just mad and sounds like an afterthought to me to fill the album.  It's not a great ending to "Vive Le Rock" with the following track.  The set has so much to offer and should have been received better.

APOLLO 9 (Reprise) - A pretty pointless 1 and a half minutes of a stripped down version of the hit single.