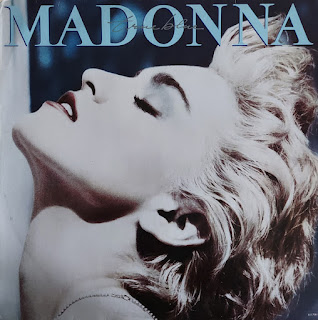 PAPA DON'T PREACH - Madonna's third studio album opens with the critically acclaimed track that was her second number 1 in the UK chart.  A positive anthem for young mothers everywhere and stressing the message that women can be strong in adversity.  This strong feminine image was pioneering to women throughout the 80s and 90s.  A great mid tempo orchestrated Pop ballad.  Classic.

OPEN YOUR HEART - A favourite track of mine, I love the throbbing uptempo clattering of drums.  A great anthemic chorus and big vocals from Madonna. reaching number 4 on the UK chart, the top ten hits kept coming.  This had a hint of Motown and R 'n B in there too.  One of Madonna's best.

WHITE HEAT - This is a mid to fast paced Synth Pop with hints of Rock guitar sounds.  Sampling the film White Heat's dialogue and gunshots its a decent song.  Not one of my favourites but its got a good tempo but is a little too repetitive for me.  As with all great artists there has to a handful of songs that honestly we have to say don't match the majority of class we are accustomed to.

LIVE TO TELL - An incredibly moving and passionate Pop ballad.  This again proves Madonna's growing maturity in songwriting and vocal skills.  The lead single from this album reached number 2 in the UK chart.  An absolute classic.

WHERE'S THE PARTY - An energetic Dance Disco track that would not be out of place on either of the first two albums.  Its big, brash and bouncy and Madonna's vocals carry this to an acceptable level of quality.  Its a decent song if not a great song.

TRUE BLUE - The title track reached number 1 on the UK chart and is a really cool old style Rock 'N Roll doo wop ballad with that hint of Motown Soul.  Complete with cute harmonies and a very slight but clever beat in the background.  It is Dance Pop with a twist.  Great song.

LA ISLA BONITA - Spanish for "The Beautiful Island" this Latin inspired mid tempo Pop ballad is another brilliant song.  It also became yet another number 1 for the already titled Queen of Pop.  Lovely vocals over a summery sunny beat and exquisite Spanish guitar mark this down as classic Madonna.

JIMMY JIMMY - Really not sure of this one, it sounds like a filler, an afterthought.  It sounds more like a demo that Madonna made during her "early years" recordings.  It tries to be old style 50s Rock 'N Roll but doesn't really work.  The bridge has a nice layered vocal but that's the only positive I take from this.  Never been a song I continue to play from my Madonna collection.

LOVE MAKES THE WORLD GO ROUND - Enhanced its reputation at the Live Aid performance.  This is a greeat Dance Pop song with a positive message.  Apart from "Jimmy Jimmy" this is another polished album with some fabulous tracks proving that Madonna was smashing the 80s as she would do in the 90s and early 2000s too.