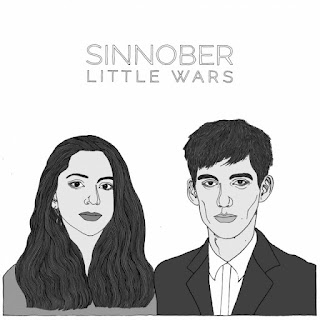 EVERYTHING WE NEVER ASKED FOR - The debut album by Sinnober (multi-instrumentalist songwriters Sebastian and Natalie Brice) opens with a smooth Folk Pop ballad.  Beautiful harmonies and light melodies ease you into this album.  Reminds me a little of Simon and Garfunkel in its composition.

MARIA - A little more stripped back than the previous track, this Everly Brothers styled track focuses on the brilliant vocal arrangements before reaching a minor crescendo towards the end.  Nice and mellow.

GO BACK - Another really polished song from this debut album.  Its 60s style Alternative Pop has slight hints of Swing and Jazz.

REALITY TV - This slow Pop Rock ballad reminds me of Bon Jovi's Acoustic numbers where they slow everything down and its almost grass roots.  Really lovely song.

TALK ME DOWN - A pure, live sounding Acoustic Pop ballad with hints of Rock.  Just sounds amazing and even better in headphones, its like you're in the studio with them!

UNTIL IT RAINS - This Pop Rock slow tempo track has a little Grunge or Gothic feel to it.  It has moodiness and melancholy and is a great track.

HAVE A LITTLE LOVE - This sweet Folk Pop ballad makes me think of Bangles and Susanna Hoff's breathy vocals sung with emotion over a sparse backing track.  For a debut album this set is an accomplished set of songs by such a new artist.

ZIA - A mellow instrumental to finish the album.  It is eerie, sometimes medieval sounding with hints of Eastern influence.  Laid back and cool.