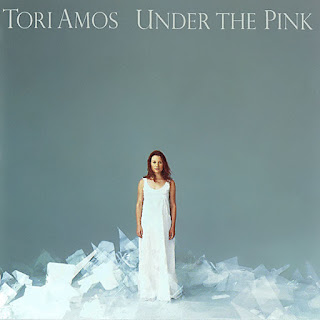 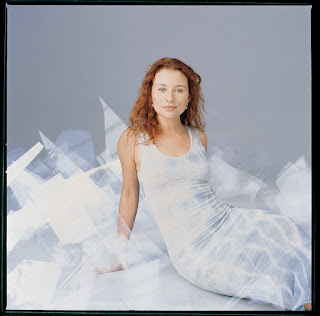 PRETTY GOOD YEAR - Tori's second studio album kicks off with this quirky, sometimes sad and ironic but a great track.  Lots of beautiful soft, pure vocals, piano orchestrated anthemic parts, agonised screams.  Its unique keyboards led Alternative Rock sounds like nothing else as was introduced on her debut album, "Little Earthquakes".  As a single it reached number 7 in the UK chart.

GOD - A sarcastic message to God, with the lyrics "God, sometimes you just don't come through, do you need a woman to look after you?".  The song is like a distorted Electronic Rock number with even the odd "angels" chant.  One of my favourites, it has a little brashness and good tempo.  Maybe the subject matter controversy halted this single's progress at number 44 in the UK.

BELLS FOR HER - A sparse piano led ballad-like track with the keys almost sounding like Christmas chimes.  This is not a cheerful song, its quite sad and melancholic singing about teenage thoughts and hopes.  It is beatifully calm and the breathy, almost whispered vocals are sad, pure, soft and eerily sexy.  Another gem.

PAST THE MISSION - An almost jazzy feel to this track.  Tori plays chanteuse as the crescendo builds up to the chorus and a more fuller sound.  Reaching number 31 in the UK chart this is a more radio friendly Alternative Rock Pop track.

BAKER BAKER - A lament on losing a boyfriend because she couldn't give herself emotionally rather than physically.  Hence the "make me whole again" lyrics.  The past rape at 21 described in "Me And A Gun" from the last album may have given her a tough time to "give herself fully" again in a relationship.  Quite sad when you know the background, but its a lovely song.

THE WAITRESS - A really eerie moaning at the intro and the track continues in a dark, grisly tone.  Its like a Grunge Rock song with agonising wailing vocals.  Not one of my favourites, sometimes its a bit too weird for me.  The soft vocals then the ear piercing wailing gets a bit too much of a shock.

CORNFLAKE GIRL - A really great song and a classic from Tori.  The lead single from the album reached number 4 on the UK chart and was a global smash.  A perfect piano led Alternative Pop track, the almost Classical piano merges with heavy keys into rockier territory.  It is energetic and catchy and is a great song to sing along to.  An alltime favourite of mine by any artist.

ICICLE - A really beautiful, gentle song with sparse piano and Tori's exquisite vocals.  It actually feels like a wintery song in the cold! Genius.

CLOUD ON MY TONGUE - On this track I see the similarity made with Kate Bush, its a pretty average song in my opinion, not one of my favourites.  Although as an artist Tori and Kate are worlds apart (Kate being more Pop and Dance where Tori is more Rock and Indie), this song is a mean impression of Kate.

SPACE DOG - Offbeat almost medieval track with its on and off percussion and classical segments.  Again not one of my favourite Tori tracks but after having all off her albums there are some great tracks that stand way above others.

YES, ANASTASIA - An epic almost 10 minute mini movie theme.  A strangely engaging track with a little of everything from this album.  Nice finish to the set.