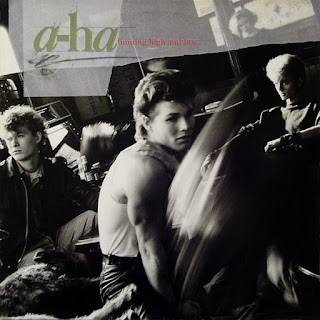 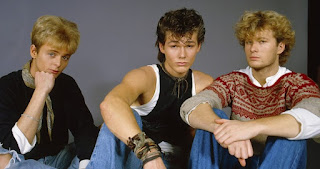 TAKE ON ME - The band's debut album opens with the classic 80s track and unmistakeable Synth Pop intro.  Loved this song instantly on first listen and was then hooked on A-ha and Morten Harket's incredible vocal range.  The track finally charted after a couple of attempts and reached number 2 in the UK charts.  Its accompanying video was groundbreaking using animated and live action scenes sequenced together.  A masterpiece.

TRAIN OF THOUGHT - The third UK single release and reached number 8 in the chart and was their third successive top ten hit.  This has a typical Synth Pop fast paced drumbeat with a surprisingly slow tempo vocal by Morten, showing off his complete range in the song.  It grows on you after a couple of listens.

THE BLUE SKY - At just over two and a half minutes this probably could be considered a "filler".  Its a nice, upbeat poppy track but doesn't really grab you like the previous tracks.

LIVING A BOY'S ADVENTURE TALE - An almost dramatic musical score, it is typical Electronic Pop.  A decent song but not one of my favourites.

THE SUN ALWAYS SHINES ON TV- Another memorable intro opens this second UK single that finally hit the top spot in the chart.  One of my favourite A-ha songs.  It is a great blend of Pop, Synth Pop and Rock.  I loved the rockier sound which they took to a higher level gradually on the next few albums.  Awesome track.

AND YOU TELL ME - This track is under two minutes long and is a whimsical, minimal offering Morten to sing almost unaccompanied.  I would suggest this be taken as a "filler" also!

LOVE IS REASON - Released in a couple of countries as a single, this track is a catchy New Wave/Europop hybrid that is quirky enough to keep the attention.

DREAM MYSELF ALIVE - A somewhat repetitive Synth Pop track in the style of Erasure, maybe.  Its not a bad song just needs a bit more "oomph" to hit the heights of other great A-ha tracks.

HERE I STAND AND FACE THE RAIN - The album ends with this unusual track.  It has a mystical vibe about it with some choral chants and a very dark musical backing.  Great end to the debut album.