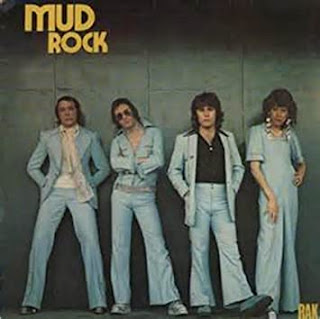 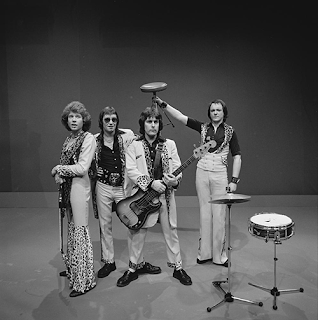 ROCKET - The debut album opens with this fourth single from the set that reached number 6 in the UK chart.  An original composition by renowned writers Mick Chapman and Nicky Chinn.  It is a straight up Pop Rock track with a memorable chorus as was Mud's forte.

RUNNING BEAR - The first cover on the album written by The Big Bopper (Jiles Perry "JP" Richardson Jr.) and gave Johnny preston a big number 1 hit on his debut in 1959.  It's a mid tempo almost Native American sounding blues song.

THE HIPPY HIPPY SHAKE -A Rock 'n Roll/Blues/Rock combo track with some great guitar solos.  One to really rock out to!

SHAKE, RATTLE AND ROLL/SEE YOU LATER ALLIGATOR - A medley of two great straight up Rock 'N Roll hits by Bill Haley and the Comets, both top ten hits. Singer Les Gray always did a mean Elvis Presley impersonation, a little of which is heard here!

DYNA-MITE/THE CAT CREPT IN/TIGER FEET - Another medley, this time of three original top ten hits written by Chinn and Chapman.  Reaching number 4, 2 and 1 respectively in the UK charts.  A big slice of classic Pop Rock and catchy choruses abound.  Pity all three were not presented in full form but this is a great taster.

THE END OF THE WORLD - A cover version of the Skeeter Davis track written by Arthur Kent and Sylvia Dee.  A soft, emotional kind of doo-wop song that is a nice break in the Rock and Pop of this album.

BLUE MOON - A more conventional, down the line doo-wop song which was a hit for The Marcels in 1934.  Ably sung by Les and proving that the band could switch to any genre.

IN THE MOOD - A rocked up and updated cover version of the Glenn Miller big band classic.  An instrumental but still great.