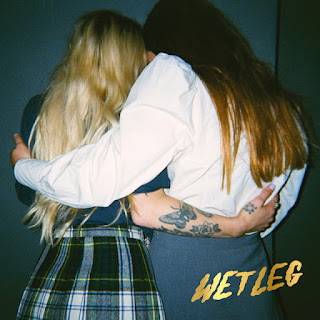 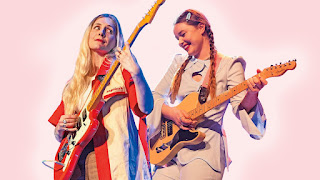 BEING ALONE - The opening track to this debut album by Rhian Teasdale and Hester Chambers is a quirky mix of 90s Grunge and Alternative Pop.  Add a little Psychedelia, funky drums and some flirty, panted vocals this is a great track.

CHAISE LONGUE - The debut single by the girls only reached number 74 in the UK chart but had massive play on all platforms and got the band noticed.  It is mostly spoken tonge-in-cheek flirty vocals but its incredibly catchy, reminding me of Elastica and Sleeper in the 90s.  Got me hooked to the girls' music.

ANGELICA - A cool, hypnotic slice of early 70s Psychedelia Pop Rock.  Another catchy song that once it hits your head it becomes memorable.  Love it.

I DON'T WANNA GO OUT - An Alternative Rock track similar to Garbage with a slow, atmospheric style.

WET DREAM - The second single is a mish mash 90s Pop Rock mix of Grunge, Elastica-style vocals and backing but also a little Alanis Morissette.  It's a sexy yet cool rocking track that seems to incorporate many genres.

CONVINCING - This reminds me of No Doubt for some reason, its not as catchy as the previous tracks but a good Alternative Pop song.

LOVING YOU - A much softer track sounding a little Motown and Soul.  The vocals sound a little like Donna Summer on "I Feel Love" and the basic sound is similar to "La La Means I Love You" by The Delfonics. Nice song.

UR MUM - A really unusual quirky song with a mixture of genres once again and also vocals from light and soft to screams.  Almost Psychedelic almost Brit Pop.  Cool track.

PIECE OF SHIT - Another light and breezy Pop track that slides along at a steady pace, its a little Catatonia, and somehow bears a slight resemblance to Prince in construction.

SUPERMARKET - Kind of reminds me of the madcap Alternative Rock of Red Hot Chili Peppers.  Its crazy but brilliant.

TOO LATE NOW - It sounds a little like Bjork, an experimental Indie Pop then changes into a heavier Punk style merge with Grunge.  A fine end to a great debut album.