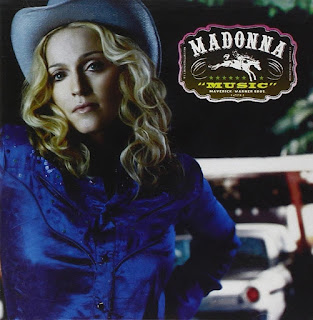 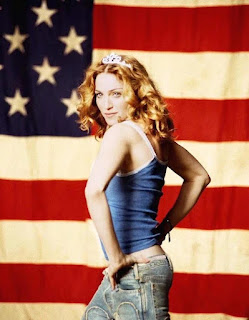 MUSIC - Madonna's eighth album for me, is her last really great album in my opinion.  This opening track was released as the second single form the album following "American Pie" (which was later added to certain versions of the album) and reached the accustomed number 1 spot in the UK chart once again.  A supercharged Pop track mixing Funk, Electronica, Dance and Disco it is one of Madonna's best tracks.  Featuring the infamous "Ali G" in the video it was a hit all over the globe.

IMPRESSIVE INSTANT - Not one of my favourites, a bit too many effects and the vocoder vocals for me.  It is a mishmash of Electro Funk and Pop and doesn't really grab the listener either lyrically or musically.

RUNAWAY LOVER - A frenetic William Orbit co-written and produced track that has potential, the chorus could be catchier if the backing wasn't so overpowering, it becomes an instrumental drum and bass track with vocals way back in the mix.  Frustrating track.

I DESERVE IT - A slice of slow and lush Morcheeba style Trip Hop where Madonna uses her emotional vocal techniques she learned all those years ago filming "Evita" which graced tracks such as "Secret" and "Frozen".  This song is one of my favourites.

AMAZING -  A track similar in style to "Beautiful Stranger", this is a great uplifting, almost funky track.

NOBODY'S PERFECT -  The vocoder is back and again it makes the song even more dreary than it already is.  This track slumbers on at a slow, eerie pace and it sounds like an experimental disaster.

DON'T TELL ME - Back to the good stuff, this single reached number 4 in the UK chart.  A great Trip Hop slow ballad with a genius sprinkling of Country Pop.  Brilliant song.

WHAT IT FEELS LIKE FOR A GIRL - Reaching number 7 in the UK chart this track one of the most mature sounding songs she has recorded (until this album).  Beautiful vocals and a really summery, wistful light ballad.  A little Electronica and Trip Hop hybrid that works superbly.

PARADISE (NOT FOR ME) - Atmospheric, eerie sounding kind of early Synth Pop, it grows on you after a few listens but its a very moody track.

GONE - A really lovely Pop track similar to a couple of tracks on "Bedtime Stories".  It almost has a jazzy swing feel to it.  A steady slow backbeat with snippets of Acoustic guitar give it a really nice laid back feel.

AMERICAN PIE - A cover of Don McLean's classic, rated by himself as a "gift from a goddess".  This version has a hint of Dance, Pop and Electronica but still does the original justice in the vocals.  Superb end to the album (although this track was only added to some versions!).