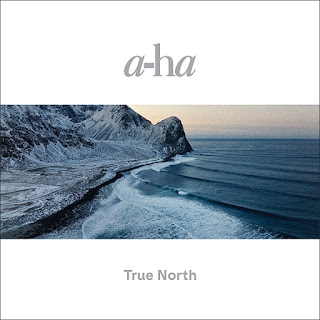 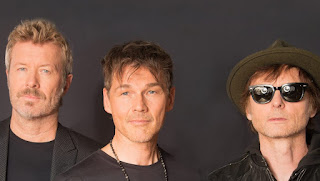 I'M IN - The opening track on the band's 11th studio album was also the first single released.  This is an orchestral style, piano led Pop ballad that is full of hope and positivity despite its melancholic sound.  Morten's vocal is as impeccably emotional as ever.

HUNTER IN THE HILLS - This kicks off in some musical based sounds evoking a "thriller movie" imagery.  Has a very orchestral jazzy feel to it.  Unusual for the band but it works.

AS IF - This ia a mid tempo 80s New Wave ballad that almost sounds like Folk with a little Americana thrown in for good measure.  Was the third single released from the album.

BETWEEN THE HALO AND THE THORN - This is almost reminiscent of the band's debut album's slow songs but with a huge orchestral twist.  Still waiting for the rocky quicker song to liven the album up, although a nice relaxing listen so far.

TRUE NORTH - A more familiar sounding A-ha on this title track. The rockier, anthemic, atmospheric ballads that started briefly on "Scoundrel Days" and came in full force on "Stay On These Roads".  As a big A-ha fan this is what I waited for on this album.

BUMBLEBEE - A slightly more upbeat throw back to "Hunting High And Low" with a quirky, bright and breezy track with little snippets of Trip Hop styled beats.

FOREST FOR THE TREES - Another orchestral sounding "movie" like backing, it almost takes off but doesn't quite grab me.  It's a nice enough song but like most of this album, it just needs that extra A-ha sparkle.

BLUEST OF BLUE - Another slow track but I quite like this one, first half is Morten up front and centre with some beautiful vocals then the sparse drums come in.  It has a very 60s Folk Pop sound.  Along with the title track this is a favourite.

MAKE ME UNDERSTAND - Great track, a catchy chorus with a Disco-like beat backing the vocals.  This is more like it, a great crossover Pop Rock track.

YOU HAVE WHAT IT TAKES - A nice Pop ballad that Morten sings with his usual aplomb.  Was the second single released from the set.  Great vocals intertwine with lush harmonies and melody.

SUMMER RAIN - Another look back at the previous rockier albums, this is a Pop Rock ballad with a lovely, smooth but eerie backing.  Definitely reminds me of the "Stay On These Roads" days.  Nice.

OH MY WORD - A really lush musical style ballad to finish the album, which I must say the second half of it really kicked up a gear.  This track has a jazzy Folk feel to it and ends the set on a high.