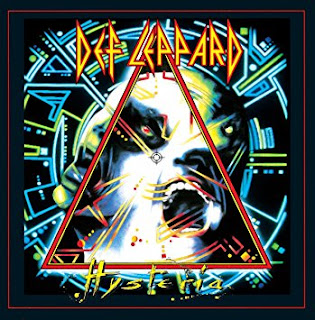 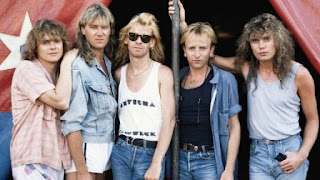 WOMEN - All the classic Rock elements are here, singer Joe Elliott's throaty vocals, screeching guitar solos, simple repeated chorus, pounding drums and almost Acoustic parts.  Throw some special effects in and this is a thunderous opening track to one of the best albums of the 80s.

ROCKET - Epic 6 minute track opening with a seeming rocket launch leading into a burundi tribal drum section.  A midtempo Classic Rock track with Joe exercising his vocal screams.  Cleverly includes hints to other songs on the album "love" and "bites" from "Love Bites" and "we're fighting with the gods of war" sung backwards from "Gods Of War"!.  Lots of effects, great production, gives an eerie addition to the track.

ANIMAL - This awesome track became the band's first top 10 hit in the UK and its a classic.  One of my favourites from the band (quite a few from this album too!).  A mix of Hard Rock and Pop Rock, the catchy chorus made it cross over to the radio listeners.  You just can't help but sing along to this track.

POUR SOME SUGAR ON ME - Another gem of a track, sing along, incredibly catchy chorus with a fabulous pumping Rock backing and of course this is one of my favourites and a memorable track for anyone who listens to it.  Air guitars and Rock singing miming in full effect.
ARMAGEDDON IT - Almost Country twanged guitars in a track that has elements ot Glam Rock and Classic Rock.  The class of the tracks on this album are top notch.

GODS OF WAR - Starts off with a brooding,moody, dark intro before it becomes a pretty basic anti-war Pop Rock track.  Not one of my favourites.  On such a great album this is a disappointment.

DON'T SHOOT SHOTGUN - I have seen reviews of this track saying its one of the worst songs of the band's career!  It is not that bad, its a pumping Rock Blues track that I love.  Reminds me of early Bryan Adams albums and sounds like the band are having a fun workout.

RUN RIOT - This is more like late 70s Classic Rock, also reminds me of AC/DC a little.  A hard rocker that just doesn't let up, its non stop and frenetic pace grabs and holds your attention to the end.  It is fun and has hints of Punk too.

HYSTERIA - The title track is a masterpiece of a Power Rock ballad.  It is emotive and moody and a class song.  This is up there with all the classic 80s Rock ballads.  One of the band's best songs if not THE best.

EXCITABLE - A Rock track with loads of Funk.  As we found later on in their career they did like to experiment.  Again this was not rated by some reviews I saw but I like it.  Its different, catchy and has a great punch to it.  This is almost Def Leppard merging into Red Hot Chili Peppers.

LOVE AND AFFECTION - A moody track to end the album and its a bit of a dampener on a brilliant album.  Not a favourite of mine, it meanders a little and doesn't grip you like the rest of the set.