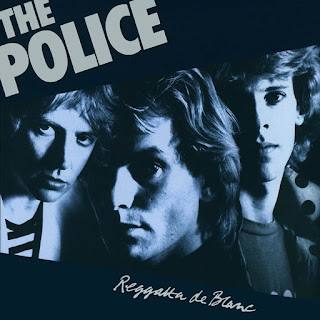 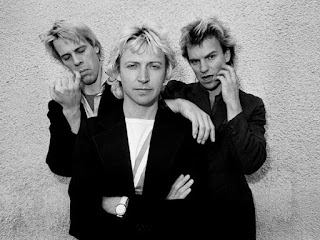 MESSAGE IN A BOTTLE - One of the first songs I heard of The Police as an 11 year old lad.  One of those songs that stay in your head.  Great guitar Pop Rock with a repetitive engaging drumbeat and pumping bass.  Add to that a catchy chorus and this couldn't fail to be a hit.  The guitar melody throughout is similar to that of Blue Oyster Cult's "Don't Fear The Reaper".

REGGATTA DE BLANC - The title track is a mostly experimental instrumental Ska/Reggae/Rock crossover with various tribal chants by Sting.  It is almost Punk sounding in parts too.

IT'S ALRIGHT FOR YOU - This is a punchy pumping Punk/Mod Rock hybrid based on a repetitive drumbeat and guitar riff.  A foot tapper if nothing else.

BRING ON THE NIGHT - A New Wave/Reggae Pop track, it is quirky bu pretty unremarkable.

DEATHWISH - A funky Ska based track that bounces along nicely until the drums kick up a beat at around the 2 minute mark to lift the track from obscurity.

WALKING ON THE MOON - The second Number One for the band in the UK, another familiar song on everyone's lips when they are asked to name a song by The Police.  A midtempo Rock track with Reggae, Ska and almost Jazz styles incorporated just as most of the songs on the previous debut album.  A classic.

ON ANY OTHER DAY - Drummer Stewart Copeland wrote this quirky, tongue in cheek track and sings lead vocals.  Its Punk Rock raw style works.  It sounds off the cuff and reminds me of Talking Heads or later They Might Be Giants.  Interesting and good fun.

THE BED'S TOO BIG WITHOUT YOU - This is a straight up Reggae Pop track, its annoyingly repetitive at times but the music is highly engaging and relaxing.

CONTACT - This is a sci-fi sounding, moody track, probably one of the forebears for the later "Ghost In The Machine" and "Synchronicity" albums.  The low key guitar riffs and light drums make it sound eerie.  Love this track.

DOES EVERYONE STARE - A quirky jazzy Pop track that details a person's insecurities in life. Another quirky and ironic track written by Copeland.

NO TIME THIS TIME - Elements of Ska, Pop, Rock and Reggae make this experimental-like jam.  Pretty much a compilation of the tracks on this album in one song.  great uptempo ending to the album.