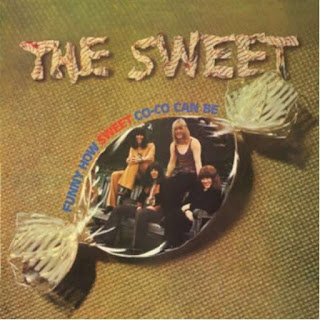 "FUNNY HOW SWEET CO-CO CAN BE" 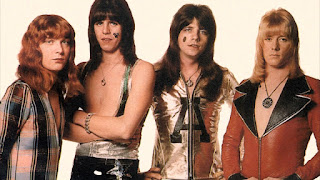 CHOP CHOP - A little Funk, a little Progressive Rock with some very eerie, shadowed vocals by Brian Connolly.  The band were not scared of experimentation and this was certianly one that worked.

REFLECTIONS - A cover of The Supremes' 1967 hit.  Brave move from a new Rock band on their debut album, covering a Motown track.  A nice version and Brian's voice seems to suit the style.

SANTA MONICA SUNSHINE - Another change in style for this debut set, proving the band were not going to be pigeonholed into just a Glam Rock band.  This is Country twanged Blues.

DAYDREAM - This is another cover of the classic by Lovin' Spoonful released in 1966.  Great popular Folk Rock song that everybody remembers when they hear it. A great cover version too.

FUNNY FUNNY - 60s Beat Pop meets early 70s Classic Rock, one of my favourites and the first hit in the UK charts for the band.
TOM TOM TURNAROUND - Very unusual Acoustic Folk track, took me a few listens to really appreciate this one.

JEANIE - A kind of hillbilly Country Rock track, one of my favourites, great chorus and quirky backing.

SUNNY SLEEPS LATE - Almost dark Progressive Rock track, again takes a few listens to get this in your head, its a little bit experiental and off key music confuses you at first.

DONE ME WRONG ALRIGHT - Awesome Classic Rock track, one of the best by The Sweet.  It can match all the Rock bands of the early 70s such as Black Sabbath and the like.