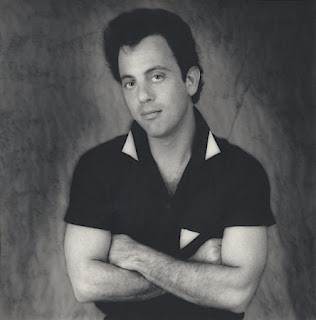 EASY MONEY - A Soul/Funk foot stomper, in the style of James Brown and one of my favourites, and maybe could have been a single but maybe there were just too many great tracks on this album.

AN INNOCENT MAN -  The 50s style of The Drifters (of whom my dad was a big fan) sounded great to me and brought back some memories of secretly playing the band's hits on old vinyl.  The song continued Billy's Top Ten singles successes from this album.

THE LONGEST TIME - Again another different style and genre.  A classic Doo-Wop song complete with finger snaps and hand claps and various harmonic vocal backing.  The crazy thing is, these songs are usually made by vocal groups but Billy decided he wanted to do all the backing himself including the percussive elements and vocal ranges.

THIS NIGHT - Probably the the "filler" song for me, not that it is bad but the other songs are so great.  Notable for its use of Beethoven's second movement "Pathetique Sonata" in the chorus of the song.

TELL HER ABOUT IT -  The great authentic Motown feel with harmonious vocals like the classy singing groups The Supremes and The Temptations with a catchy chorus captured the ears instantly.

UPTOWN GIRL - Accompanied by a video featuring model Christie Brinkley, who Billy later married.  Said to be an homage to Frankie Valli and the Four Seasons, it was a great song which gave every "backstreet guy" the hope of finding an "uptown girl".

CARELESS TALK -  50s style Doo-Wop/Motown track in the style of Sam Cooke with little elements of The Drifters.

CHRISTIE LEE - Fast paced piano led Rock N' Roll track, think Little Richard or Jerry Lee Lewis.  Add some brass and this is a great track which sounds like a proper jam session where everyone is having fun.

LEAVE A TENDER MOMENT ALONE  -  This song reminded me a little of a Stevie Wonder style song, a gentle Motown and Soul number.

KEEPING THE FAITH -  Billy reminiscing about the 50s lifestyle and how things were not always great but he's "keeping the faith" in that the future will be alright.