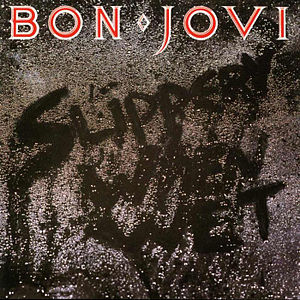 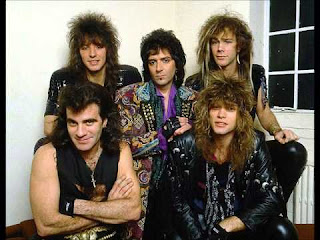 LET IT ROCK - Possibly one of the best openers of a record in my opinion.  A huge church organ opening then an explosion of screeching guitars, thumping drums and anthemic chorus paved the way for the new Bon Jovi sound.

YOU GIVE LOVE  A BAD NAME -  The first single from the album and a teaser of what was to become Bon Jovi's signature sound for the next decade.  Anthemic Rock with screeching guitars, keyboards and pounding drums with Jon Bon Jovi's unmistakeable vocals singing catchy choruses.

LIVIN' ON A PRAYER - Similar to the previous track, real Arena Rock.  Apparently this version is totally different to the original with extra drum fills, bass and the "talk box"!.  Awesome song to really rock out and sing along at the top of your voice!

SOCIAL DISEASE - Not a favourite of mine and a lesser song on this album but it has a lot to compare it to.  Lacks a good enough catchy chorus in my opinion to stand out among the goodies here.

WANTED DEAD OR ALIVE - One of my favourite tracks by the band.  Cowboy song with the hero in question having a gutiar instead of a gun, riding a "steel horse" and with a "loaded six string".  Probably telling the story of the dives and bars that the band played in to learn their trade.  Great harmonies and great Rock twangs and atmosphere.

RAISE YOUR HANDS -  Guaranteed stadium participation but not a particularly great song, it seems a bit mixed up for me.  It chugs along nicely at a pace but the contecnt including lyrics is not that engaging to the rest of the album's classics.

WITHOUT LOVE - To the soppy Rock lover like me has the best of both worlds, similar lyrical emotion to "Never Say Goodbye" but its half ballad/half Rock works superbly and yet another memorable chorus.

I'D DIE FOR YOU - Along with "Social Disease" a lackustre addition to the album. Akin to "Shot Through The Heart" but without a good chorus, it kind of stumbles through to the end like an afterthought filler.

NEVER SAY GOODBYE - Really lovely song and a romantic Rock classic, Jon really got the emotional vocals to a tee in this one, amazing it only reached 21 in the chart here but I guess the album was in everybody's household by then! 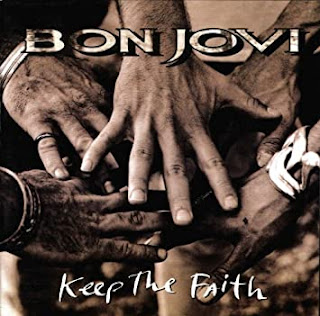 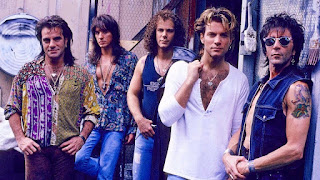 I BELIEVE - A crash of drums and screeching guitars set off this album nicely that re-invented the band as a quality, mature Rock outfit..  Top notch Hard Rock track that pumps up the volume right from the start.

BED OF ROSES - Another favourite track of mine, emotional and melancholic and a classic Rock power ballad.  Its minimal backing, leaving Jon to carry the song throughout merged with lovely harmonies and melodie make this a really great song.
IF I WAS YOUR MOTHER - Classic Rock meets Grunge track that has an almost Thrash Metal start and includes distorted vocals and a quiet string accompanied snippet.  Another gem.