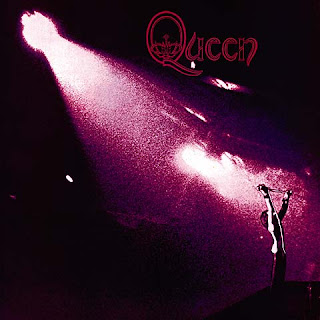 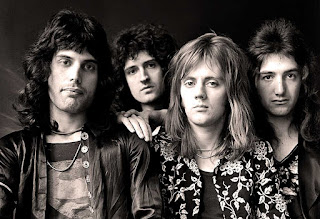 KEEP YOURSELF ALIVE - The debut single opens this first album by the band.  It remains the only single not to chart in the UK and was pretty much ignored.   It sounds like an experimental track with many genres intertwined, Glam, Progressive and Hard Rock.  Its still a great track though.

DOING ALRIGHT - A stop-start track in the vein of Meatloaf.  It is an extravagant dramatic operatic style song changing places with aggressive guitar solos at intervals in the song.  It's soft, emotional vocals from Freddie Mercury kind of get lost when the Hard Rock parts kick in.  Not one of my favourites.

MY FAIRY KING - Piano, guitars and drums mix that doesn't really hit it for me.  You either do it right like Meat Loaf or not at all.  Its an ok song but nothing great, a little bit too twee for a Rock band.

LIAR - The longest song on the album coming in at just over 6 minutes.  It has all the elements that later made Queen's style but its just off the mark.  It is a decent song but when you hear "Bohemian Rhapsody" you can see the epic track was in their minds even on this debut offering.  A shortened version of this was issued as a single in USA and New Zealand.

THE NIGHT COMES DOWN - An almost Blues Rock track that is unmistakeably Queen.  This has a great "live" sound that almost feeld like a jam.

MODERN TIMES ROCK 'N ROLL - A pure, blazing slice of Heavy Rock akin to AC/DC, Rainbow and the like.  Drummer Roger Taylor takes lead vocals on this track and does a storming job.  Great song.

SON AND DAUGHTER - A lazy, drawn out Blues mixed with Heavy Rock reminding me of Black Sabbath.  Freddie does his best Ozzy Osbourned impression!

JESUS - A basic Rock Opera song that seems a simple composition with overbearing feedback guitar solos overpowering the track to make it likeable.

SEVEN SEAS OF RHYE (Instrumental) - One of my favourite tracks on the second Queen album, this is the instrumental version to finish the debut set. 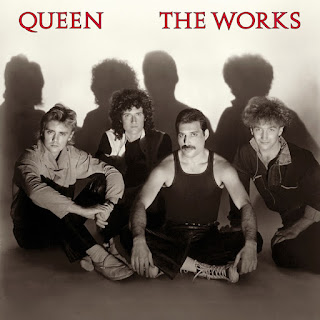 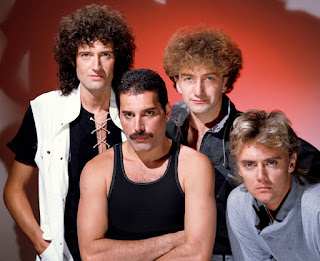 RADIO GA GA -  After the poorly received disco sound of previous album "Hot Space" in 1982, the band bounced back to Rock with this awesome album.  This first track, number 1 in 19 countries except the UK, strangely where it reached number 2.  An almost Metropolis sounding sci-fi backing to the anthemic Rock vocals from Freddie Mercury, a simple yet effective chorus and this was an instant hit.  Included on their Live Aid performance this is a Queen classic and an 80s classic.

TEAR IT UP - "We Will Rock You" style hard rocker with some awesome guitar, almost sounding like Blues at times.  Searing guitars, anthemic chanted chorus and a persistent killer beat.

IT'S A HARD LIFE - A classic Queen ballad, led by Freddie's piano with typical screaming Rock guitar by Brian May.  Reminiscent of early albums, the composition switches effortlessly from emotional sadness provided by gentle piano to positive rocking with guitar solos.  Great track.

MAN ON THE PROWL -  Another throwback to Queen's earlier catalogue, this Rock N' Roll stomper hinting at Country Blues reminds you of the 1950s.  It is similar to the classic "Crazy Little Thing Called Love" from 1980's "The Game" album.

MACHINES (OR BACK TO HUMANS) - This is a really confusing song, comprising a few different styles and genres.  Synth Pop, Rock and New Wave could be used to define this track as everything seems to have been thrown in like the proverbial "kitchen sink".  There is a lot going on and its very disjointed, extremely experimental.  Is it a filler? maybe.  It sure doesn't pack a punch like the previous tracks.

I WANT TO BREAK FREE - One of the well known tracks by Queen and an iconic, funny video of the band all in drag! Written by John Deacon, this is a great track and quickly banishes the thoughts of the previous mish mash track.  Its Pop Rock at its best, great vocal melodies by Freddie, a simple drumbeat, and not a guitar solo but a synth solo by Fred Mandel makes it a little different.  An unusual but brilliant ballad.

KEEP PASSING THE OPEN WINDOWS - The intro suggests a soft piano ballad but it quickly changes into a fast paced New Wave Pop track.  It is light and easy going and at times reminds me of Joe Jackson but also Ultravox.  Its a little overlong but its more engaging the more listens you take.

HAMMER TO FALL - Another single, and a classic Queen Hard Rock track with hints of The Sweet style Glam Rock and Classic Rock.  A gem and another hint to the older Queen albums.

IS THIS THE WORLD WE CREATED? - Not sure why "Hammer To Fall" did not end the album on a thumping high note but this track is the end track instead.  It is a pleasant enough Acoustic Folk Rock ballad but for me it brings the album down a little.  It is just over 2 minutes long but Wikipedia claims this song is one of the most famous Queen songs, I beg to differ on that one.  Nice enough but not one of my favourites, for sure.