Showing posts with the label fish
Show All 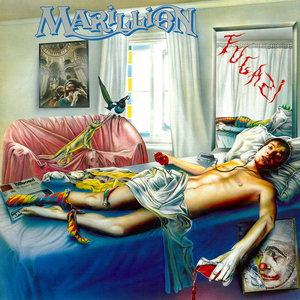 MARILLION   "FUGAZI" 1984 ASSASSING - The band's second studio album opens with their second single from the set.  It reached number 22 in the UK chart.  A big and brash anthemic track that combines their unique Progressive style with Classic Rock and a pounding drumbeat.  A powerful chorus and various vocals in his own inimitable style from Fish.  A brilliant track and a big favourite of mine. PUNCH AND JUDY - The debut single from this album that reached number 29 on the UK chart.  This is a more familiar modern Progressive Rock track with its medieval styled backing.  Still has a catchy chorus but its not as radio-friendly as the opening track but a classic to Marillion fans. JIGSAW - A lovely slow ballad kicking into a mini Progressive Rock opera.  So many changes in the song and vocals make this a brilliant experimental 6 minute jam.  Keeps you captivated to the last. EMERALD LIES - A mild, sprinkling soft intro until just after two minutes in when it kicks off
Post a Comment
Read more

MARILLION "SCRIPT FOR A JESTER'S TEAR"   1983     SCRIPT FOR A JESTER'S TEAR - The opening track of a great debut album of six epic tracks.  This Rock experiment filled song begins gently and then gives us a whimsical almost Nursery Rhyme style backing before launching into dramatic guitars and pounding drumbeat increasing in intensity and power.  Named Neo-Progressive Rock, Marillion's style of  music has elements of all genres of Rock music and this track ticks all boxes! HE KNOWS YOU KNOW - A slow almost Pop Rock track changes after some angry, anguished vocals from lead singer Fish before the 2 and a half minute mark when the glorious anthemic guitar solos and faster drumbeats kick in.  The Medieval style vocals and chants are here that make it just a little more awesome.     THE WEB -  A slow to mid tempo Rock ballad, with some awesome keyboard and guitar solos.  More Electronic Rock than the previous two tracks but no less a
Post a Comment
Read more
More posts