Showing posts with the label katzenjammer
Show All 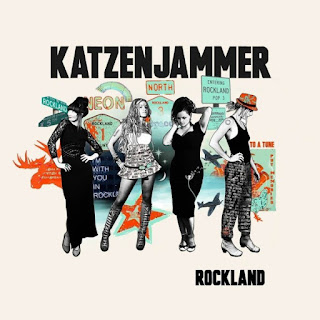 KATZENJAMMER "ROCKLAND"   2015     OLD DE SPAIN -  The opening track is almost like a pirate shanty, Indie Folk complete with harmonies, chanting and a variety of acoustic instruments.   Great intro to the third album by the talented Norwegian band. CURVACEOUS NEEDS - A quickstep tempo, a mixture of Folk, Pop, Soul and Blues.  A fabulous foot tapper! A catchy chorus make this an irresistible slice of Scandinavian brilliance. OH MY GOD - A very unusual track, its got distant Soul backing vocals at times but mostly a Punk style vocal backed by an uptempo Indie Folk.  This is genius and an experimental masterpiece. LADY GREY - A simply beautiful Pop Folk track, melancholic and emotive vocals and melodies.  Reminds me a little of Susanna Hoffs and Bangles' tracks.  Its got that 60s Pop Rock vibe. MY OWN TUNE - This track is a quirky, upbeat track that has a little Latin Disco feel with a merging of Folk and there is also a Rap inter
Post a Comment
Read more
More posts