Showing posts with the label sophie b hawkins
Show All 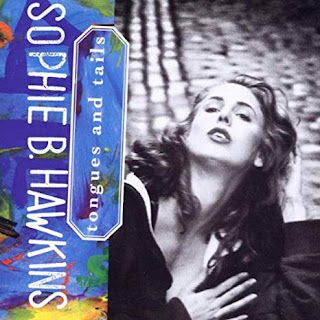 SOPHIE B. HAWKINS "TONGUES AND TAILS"   1992     DAMN I WISH I WAS YOUR LOVER - The massive hit and Sophie's break out song.  Starts off like a usual Pop song akin to Madonna (at the time) and Natalie Imbruglia but then the drums kick in and it turns into a rocker.  Class song.     CALIFORNIA HERE I COME - A slow tempo ballad with the occasional big vocals, a dreamy song for the most part, laid back and cool similar to Sheryl Crow's half Rock, half Pop style. MYSTERIES WE UNDERSTAND - Funky Pop with different genres incorporated into the song.  Uptempo backing and hints of Rock and Soul and a kind of Rap in between.  Lots going on, listen in headphones and try to pick out all the complex experimental arrangements. SAVIOUR CHILD - A jazzy Pop song that is engaging for the most part but gets a little annoyingly repetitive. CARRY ME - A very strange track, experimental, involves orgasmic moans, strange "loving mother"
Post a Comment
Read more
More posts