Showing posts with the label the proclaimers
Show All 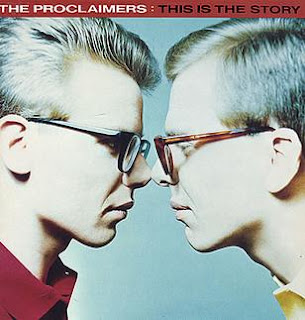 THE PROCLAIMERS   "THIS IS THE STORY" 1987   THROW THE 'R' AWAY - This debut album by twins Charlie and Craig Reid was a godsend for me in the late 80s, along with Hue & Cry, Texas, Deacon Blue and Del Amitri.  Scotland gave me hope of great music when the 80s was dying to boybands and Acid House and fake white rappers.  This opening track is a a Rock N' Roll style track with a hint of uptempo Blues.  An electric start with this debut single. OVER AND DONE WITH - Ironically sounding like a stripped down "The Passenger" from Iggy Pop with the intro.  Then the vocals kick in with the boys' inimitable style (so refreshing to hear artists from the UK not trying to sing American! It reminds me of The Everly Brothers with the dual harmonies.  Brilliant. MISTY BLUE - The tempo slows down a little with this track.  It is a passionate, gentle at times but positive Gaelic Folk ballad.  Really nice pure song. THE PART THAT REALLY MATTERS - Another 60s
Post a Comment
Read more
More posts